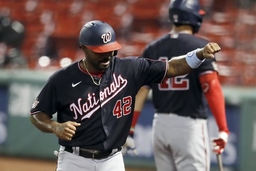 WASHINGTON (AP) Howie Kendrick was put on the 10-day injured list by the Washington Nationals on Wednesday with a strained left hamstring.

The 37-year-old first baseman and designated hitter has missed the past three games for the 2019 World Series champions, who are in last place in the NL East.

Kendrick is batting .275 with two homers and 14 RBIs in 25 games this season.

Last year, he was the MVP of the NL Championship Series and hit the go-ahead homer in Game 7 of the World Series to help the Nationals win the franchise's first title.

The move is retroactive to Sunday. The Nationals did not immediately announce a corresponding move Wednesday, when they were off.

Washington starts a four-game series against the visiting Atlanta Braves on Thursday.